There have been some members that have complained that their free speech is restricted on this site. While it is true that you can take your soapbox to the public square and say what ever you want as long as it does not violate standards.( vulgarity obsene and a few others). But when you are not in public things change .
Consider the case of the liberal darling hero Whoopi Goldberg . She insulted Jews one day and was quickly removed from the show and punished. The libs were crying FREE SPEECH loudly but the punishment continued and there was even consideration to fire her! Her free speech became restricted when she accepted a job on an entity that she didn’t own.

So Bob and RBF if you want absolute free speech on this site that bad just get your funds together and buy the current ownership out!

What is it again that you run here, other than your mouth?

Y’all keep on, they just might pay for somebody to take it. Anybody with an ounce of brain wouldn’t have a political section at all. They have the power now to remove it.

I’m sure the present ownership appreciates your advice! 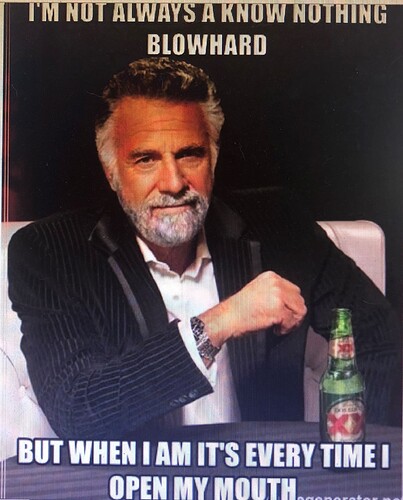 Whoopi got a little vacation out of the deal.
Jill Biden comparing Mexicans to tacos or something like that really no backlash on that either.

Judge Brown laid it out and didn’t he.

Another reason everyone should have to do time in the military.

Do you think PFC Johnson ( the VA hospital in Charleston is named after)
Looked around to see was what color everyone was before he jumped on the grenade.

We all know sleepy Joe is a racist.
He even said it his mentor and hero was the head of the KKK.

That’s my hospital. I’m a full benefit veteran - thank you taxpayers - and I have heard and read Private Ralph’ story many times. He gave all that he had out of love for his fellow man. I salute his photo every time I walk thru the doors

So Bob and RBF if you want absolute free speech on this site that bad just get your funds together and buy the current ownership out!

I already tried to engage Admin on buying the site weeks back, and got nothing in response…

I believe I may contact Admin. about purchasing the site… Shoot me a PM with your price @snickers …

I wouldn’t bring in any partners if I owned it…

I would require the primary focus to be on fishing. I would not immediately ban you but you would be given an opportunity to become more pleasant and cordial If you disagreed of course I would ban you forever. No site out there needs a heckler
About 3 or 4 mornings most weeks I have breakfast in a little hole in the wall place with 6 or 7 men sometimes 1 very intelligent woman. some Dems. Some non affiliated and a few republicans. We would never discredit each other with dirt from the past or vilify, belittle-or insult each other… we enjoy our discussions and when one is missing we miss him With this in mind I would require that all members become accountable.to the point That we know to whom we are speaking. This would promote civility. I have no problem with a civil respectful person with a differing viewpoint we get back what we give. I can already anticipate what your reply will be But perhaps you could see another’s point if view. I mean look we know that you are a never trumper but do you have to beat everyone on the head about it every day?
Do you really think Bobs rude attitude and silly photos and cartoons and repetitiousness help this site? I am quite friendly with 2 merchants that have advertised here and they know who you and Bob are and desire to spend their advertising $$$$ in a more friendly setting . If my money was on the line there would be steps taken to keep anyone from fouling the atmosphere here.

Soo, then why do you act like you hate Dems here so much… How would your Dem buddies feel if they read the garbage you post here?

Why don’t you ask Bay to quit posting misinformation frequently, and yes Bay does try to influence what people think and call people names… You and I both know why you don’t call him out… Simply because you believe the same crap too…

Geez, the Drumpf loyalist and the victim mentality… Oh, the MSM is after us, fake news, blah blah blah…

Almost forgot, I asked you a simple question, and you come back this all this other crap… Again, what would you do with this site SPECIFICALLY if you owned it… Fishing is obvious… If you don’t understand my question, then say so, I’ll clarify if needed…

As I expected total bull crap from you. Everyone here read where I offered to to extend an olive branch to you and Bob and basically you both spat on it. . I’m not the one that starts posts with Haha laughing at their fellow members. I don’t care if you are a Dem or what ever but if one is rude , irritating , heckling and obnoxious they get it back. No one likes to hear someone try to ram their view down their throat.No one likes to be insulted and ridiculed which is your stock in trade But it’s easy to do when you are hiding behind a keyboard

I challenge you to try a kinder approach for a few weeks and see how it is received. I seriously doubt you can do it Because creating a disturbance and issues is your sick entertainment , but if you can , I’m pretty sure your treatment and respect would improve

Oh and also. If I owned this site )which I would never want ) I would hire a manager that understands how this should be done. And his payment would be based on results. -$$$$$

Everyone here read where I offered to to extend an olive branch to you and Bob and basically you both spat on it. .

There you go lying again…

another response from a cartoon fan. Let me know when you return to reality

You commented that that note to you was “progress” and accepted it back then. you are now shifting gears to kiss up to RBF. what you got from me is better than what I got from RBF. Obviously you nor RBF never served or you would understand how serious this is.

WWTJD What Would Tom & Jerry DO

Let’s just “bury the hatchet” with this garbage of back and forth. You have said many demeaning statements about folks here. You have called Poly a no good godless liberal and insulted him about his family’s wealth. You also have insulted btodag as well many times.

Think about this different POV. If you are what you say you are, then instead of lashing out to btodag and others, you should set an example. If you are the age you indicated, then become a calming voice during these BS exchanges, and bring value from your experiences rather than being defensive. If you really have served, then what someone says here in a BS fishing internet site shouldn’t rattle you a bit because of your life experiences. These things are why you don’t come across as having been “battle tested” (no pun intended). You present yourself as someone that doesn’t have thick skin.

If this is what you seek: I am man enough to extend an apology that I didn’t mean to hurt your feelings about questioning your unverified service.

Battle tested ? Well yes I am , to the point that I will not take your bull crap. You can kiss both cheeks - I’m not required t

I even invited you to my home to visit and meet my family, you in turn insulted me and told me to essentially shove it…

All lies. Your apologies were in fact insults. I pmed you when I was on at trip to N C passing near fort mill and you replied to keep on moving. “ this is a nice community we keep riff raff like you out. Keep moving”. I challenge you to post the actual insult riddled apology’s both for all to see and expose your cowardly lies. You don’t have the guts to post the actual words you typed. Everyone here knows what you are. No man would accept an apology that reversed into a further insult

All lies. Your apologies were in fact insults. I pmed you when I was on at trip to N C passing near fort mill and you replied to keep on moving. “ this is a nice community we keep riff raff like you out. Keep moving”. I challenge you to post the actual insult riddled apology’s both for all to see and expose your cowardly lies. You don’t have the guts to post the actual words you typed. Everyone here knows what you are. No man would accept an apology that reversed into a further insult

THERE YOU GO LYING AGAIN, YOU NEVER PM’D ME AND ADMIT IT BELOW… THIS WAS ONLY ABOUT A MONTH AGO I CAUGHT YOU IN THE SAME LIE…

For all you Gun Grabbing Socialists out there

The First Lunatic(Democrat) to drop out

Once when I was around the fort mill area in I77. I did contact the troll. And I was told that it was a very nice community Too nice for me and for me to keep moving along

What Im saying is , that there are better people that I prefer to spend time with. You actually invited me once - did you forget? I never responded.

Yes, I remember, and at least I tried… Glad you have “better” people to spend time with, and I hope that works out for you…

I pass thru Fort mill quite often . I just hold my nose and keep on rolling .

I would have to write a book to show all the lies we have caught you in . And probably a library to list all the rude insults.