They are just about ready to start recommending cuffing and stuffing. Can’t wait. 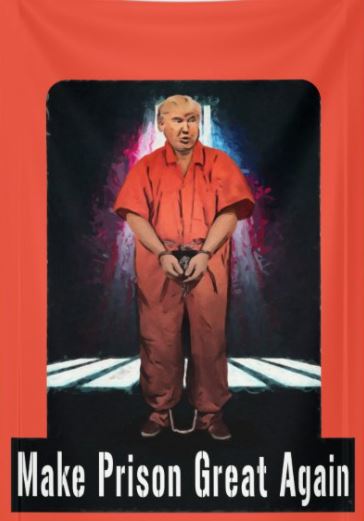 Leonard Greene: Black Lives Matter. So does the truth about Jan. 6 (msn.com)

Republican Gabriel Sterling, a top election official in Georgia, testified on Tuesday before the House committee investigating the Jan. 6 insurrection. Sterling disproved a conspiracy theory that was pushed by then-President Donald Trump and his lead attorney, Rudy Giuliani, that fake ballots were pulled from a suitcase to help Joe Biden win the 2020 election.

Explaining Tuesday why he refused to succumb to a months-long pressure campaign by former President Donald Trump and his allies to overturn the 2020 election, Arizona House Speaker Rusty Bowers — a longtime Republican who voted for Trump and has said he would again — told the House committee investigating Jan. 6 that “I do not want to be a winner by cheating.”

“I will not play with laws I swore allegiance to,” the 69-year-old Mormon and father of seven said as his voice broke and his eyes filled with tears. “How else will I ever approach [God] in the wilderness of life, knowing that I ask of this guidance only to show myself a coward in defending the course He led me to take?”

A prosecutor who worked on the Watergate case against Richard Nixon 50 years ago said on Sunday that a Georgia election interference case is the most likely to send former President Trump to prison.

“I think that’s enough. If you’re asking me which of the cases right now, which one is going to send Donald Trump to prison, that’s the case,” Nick Akerman told MSNBC on Sunday, referring to a January 2021 call between Trump and Georgia’s secretary of state.

“If I had to put my money on one prosecution that’s going to go forward here that would send Donald Trump to jail, it’s Georgia,” Akerman, a former prosecutor with the Watergate Special Prosecution Force under Archibald Cox and Leon Jaworski, said. “No question about it.”

Fulton County in Georgia has convened a special grand jury to investigate Trump’s efforts to overturn the 2020 election results in the state. The case centers on the call between Trump and Georgia Secretary of State Brad Raffensperger (R).

Trump, who had asked Raffensperger to “find” 11,780 votes to overturn President Biden’s victory in the state, has described the phone call as “perfect.”

GOP Testimony at Jan. 6 Panel Exposes a Party Torn Between Truth and Truth

As the House committee investigating the Jan. 6, 2021, attack on the Capitol has built its public case that Donald Trump was at the center of an attempted coup, the panel has relied heavily on a seemingly unlikely stream of witnesses: Trump’s own advisers, his fellow Republicans and even his own family.

Those closest to Trump have been deposed, portrayed or shown dismissing the former president’s false claims that the 2020 election was stolen. And yet the fight to thwart the will of the people continued unabatted

The powerful testimony from a parade of Republicans, in four tightly produced hearings, has exposed in searing and consequential detail how divided the party has become between the faction that accepts the reality of the 2020 election and the many more who still cling to Trump’s anti-democratic falsehoods about a stolen election.

“If any Republicans were watching it, there is really no way they could defend a position that President Trump won the election based on the evidence presented so far,” said Mick Mulvaney, a former acting White House chief of staff to Trump.

There have been brief video clips of the former president’s daughter Ivanka Trump and unsparing testimony from a top White House attorney, Eric Herschmann, who said he scolded another pro-Trump attorney as “out of your” mind for continuing to pursue conspiracies to stop Joe Biden’s inauguration even the day after the Capitol riot.

“We’ve got lots of theories,” Rudy Giuliani, one of Trump’s lead lawyers, told a group of state legislators as he sought to forestall the results, according to testimony Tuesday from Rusty Bowers, the Republican speaker of the Arizona House of Representatives. “We just don’t have the evidence.”

davet107 on GETTR : Remember when Democrats were rioting and burning down our...

Remember when Democrats were rioting and burning down our Nation’s Capitol when President Trump was in office? Democrats are not investigating this, and why you may ask? They encouraged it… egged it on! Even bussed in the criminals to burn down DC!

Do you think the Biden administration has used stasi like tactics that should be copied and used against them after the next election?

At every turn, Garland has shown himself hostile to the Bill of Rights and to law-abiding Americans who exercise those rights, and beholden to Democrat partisans and left-wing advocacy groups. He has brazenly allowed political influence to direct the Justice Department’s considerable powers.

If you think Garland’s DOJ isn’t a threat to the republic, then you need to start paying attention, because the weaponization of federal law enforcement under Biden and Garland is almost certainly going to get much worse.

This is using federal government resources by the current party in control against their opposition and in this case violating their civil rights as well as destroying their property during an illegal search.

When the power transfers don’t complain if you’re currently in favor of this.

Any of you Right Wing Radicals watching a real American Conservative testify?

The January 6 committee is alarmed that Donald Trump or his allies may be attempting to tamper with the testimony of witnesses participating in the congressional inquiry.

The committee shared anonymous testimony on Tuesday from January 6 witnesses detailing mob-style threats from unnamed people inside the Trump camp.

“What they said to me is, as long as I continue to be a team player, they know that I’m on the team, I’m doing the right thing, I’m protecting who I need to protect, you know, I’ll continue to stay in good graces in Trump World,” the witness told legislators.

“They reminded me a couple of times that Trump does read transcripts and to just keep that in mind as I proceeded through my depositions and interviews with the committee,” the witness added.

WOW – Cheney presents evidence that witnesses are being tampered with

@
So far, Trump’s second term has been a huge success. He has several major SCOTUS victories, looks better than ever compared to Biden, and the Jan6 theater just went full Jussie. You can’t win harder than that.

But Biden will be forever remembered for getting transgenders into the military!

Bay is not about Bull feces He shoots straight No insults no names … he did not come here saying he was the king of truth and then turned heckler. He simply lays the sards out face up and there is no push either way. That’s respectable

Better called the Dissemination of Misinformation, pure and simple…

Thanks for the update, but don’t be fooled by RBF’s desperate attempts to make you believe he is just “Devils Advocate”.

The conservative folks here are not radicals, they just care about the direction this country is going in. Pretty obvious to any sensible person that cares not only themselves, but their kids and grands.

Not sure how much you have looked into the history of the troublemakers, but please don’t take RBF by what he has said.

Bottom line, he only comes here to stir up crap.

ANYTHING someone posts from a conservative view is met with his obsession of finding something largely untrue on the web to just toss out there. Please take a moment and look at the pattern.

Debate should be welcome, but not in the way he provides it.

You have heard from plenty, and hope you will take the best actions for y’alls investment.

In closing, I wanna let you know, that in his desperate attempt to say he was threatened, I did say he needs his ass beat for the way he has replied to members. Don’t know him or where he lives…

Anyway, you can choose to grow this site, or let it shrink, IMO.