Right-wing media commenter Ann Coulter was once a huge fan of former President Donald Trump going so far as to publish a book titled *In Trump We Trust: E Pluribus Awesome! detailing all the reasons she loved for former celebrity gameshow host.

But she has cooled in recent years, turning on her former favourite and instead launching a criticism campaign as his power has waned.

The most recent iteration of her Trump-focused criticism comes in the form of a simply named podcast — “Trump is done” — during which she recently claimed “normal people” no longer cared about Mr Trump or politics in general.

Hey there @Bob_241 I didn’t know you were an Ann Coulter groupie, did you like this article she did?

Personally, I think Ashley’s diary is far more interesting, especially her showers with dad that she says were “probably not appropriate.” The Pentagon Papers drag a bit. 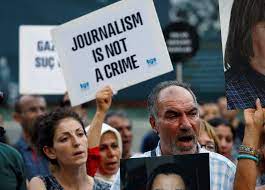 This is an odd line to read in The New York Times: In “a still-emerging story” (exciting, no?), Project Veritas “worked to expose personal information about the Biden family at a crucial stage of the…