Conditions were much better today. 6 mph wind out of the south made life easier. The water was still fairly clear but it did have some color. A perfect blue sky is not ideal for shrimping but not a killer. I marked some shrimp on the sonar and saw a few jumping as we anchored waiting for the incoming tide to move. There were shrimp once the tide moved but never many. The size was better today than Monday, not by much. More by-catch; spots, horseshoe crabs, etc. Flipper was nearby but concentrating on larger feed and left us alone.DNR was visiting everyone on the water. He said the better spots have been Cowpens and outside of Venning. I’m about ready to explore more options. My wife said the gorgeous day was a 10, shrimping was a 3. Hoping the hurricanes stay away so we can get into October. 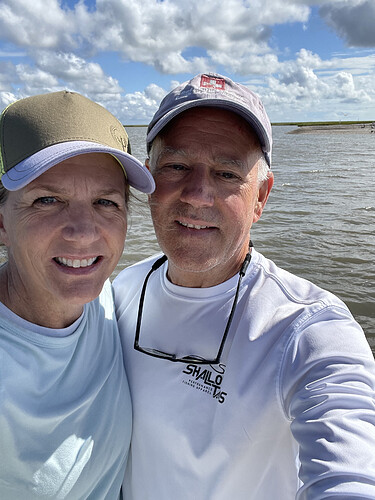 Hate it wasn’t better but at least it was fun. I was down a few weeks ago camping at Buck Hall. A lot of people camping were shrimping. It was just before baiting started so they were just trowing around to test the waters. None of them caught more than a few pounds of shrimp a day. Some were old timers & they said they haven’t seen it that dry in a long time in Bulls Bay.
By the way next time out could you share a pic of what shrimp look like on the sonar?

This was last year.

Good report. I know folks looking to make the trek from other parts of the state appreciate such intel. I’ve shrimped BB in the past. I have coolered out with some beautiful shrimp and barely caught enough for a shrimp cocktail. Still nice getting out there.

Appreciate the help. Now at least I know what to look for.