Took my best bud Ray (BOSN) out Saturday. Started out on the right foot by seeing Stump at the landing. Been a while my friend, I thought we might have seen you out there but hope you did well. 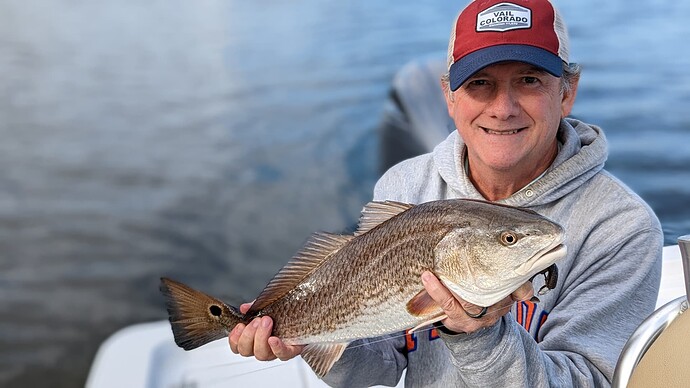 We got on a good bite of several topwater reds and one nice trout at our first drop - a spot that has been producing some lower slot reds at low tide. Ended up moving up the Cooper and caught a few pretty much everywhere we stopped. It ended up being an outstanding day, which was well above my expectations due to the low tidal range, NE winds, and water still at 81-84F.

It is always great to see my friend FatRat out there. If you have never met him, he’s 100% class act and an outstanding fisherman. 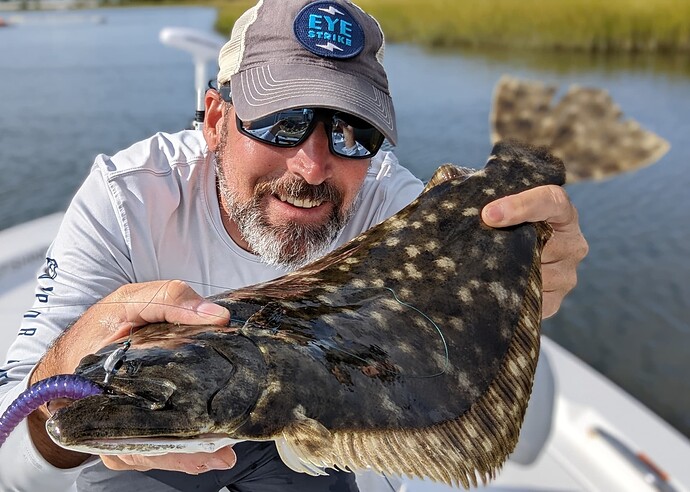 I ended up with my first Margarita Slam of the season, with a kicker Gag grouper, and Ray was just a flounder short (but also had a kicker Gag). Awesome time. Tagged 17 fish, and Ray caught a tagged fish that turned out to be mine. I tagged it in February at 14.5". He released it at 21" at the same spot. Tagging will really open your eyes to how vulnerable redfish are. A spot can be cleaned out real quick if all fish are kept.

All fish caught on Z-Man/Eye Strike combos. I used the new Kicker CrabZ for the first time, and caught a ton of fish on it. It has the perfect slot on the back to hide an OG TexasEye hook, making it super weedless.

Catching is gonna get better and better over the next weeks/months. I’m stoked.

Trivia Question: Any old time CF.com’ers know who gets naming credit for the Margarita Slam? 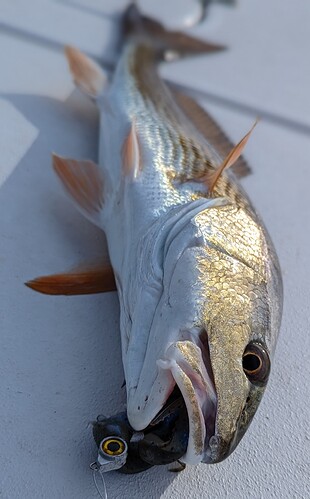 Great report Dave! Love the pic with the TT hanging out of the flounder’s mouth.

Post a pic of that Kicker CrabZ/hook combination. Sounds interesting

Thanks for the pics and report!

I saw Ray’s name in the tag returns and did a fist pump. Shoulda figured something was up… and you already know the history on the fish!

Great report, thanks!
I’m a newbie, so I’ll bite. What’s a Margarita Slam?

It feels CAC like, but for some reason I’m thinking Logga. Logga, final answer!

And great report as usual Dave. We really appreciate you sharing here.

Stump, sorry about all your adventures over the weekend, but glad you got on a few! Always good to see you.

Barbawang, she went 19.0 and back in the drink. I might keep under 5 flounder a year these days (and probably less than that) to the great dismay of Mrs Optiker, but I’m trying to do my part to help them recover. My goal is not just sustainability, but to recover to abundance of 20 years ago, THEN sustain

So, a Margarita slam is something I invented about 10-15 years ago. Redfish, Flounder, Trout, Striper, Largemouth - all on the same day and waters. You can do it as a team or boat, or an individual. The holy grail is to do it solo on the same artificial lure. I’ve accomplished this… once.

Answer to the trivia question. I was talking about this slam here on CF.com and wondering about what to call it. Cracker Larry came up with the perfect name. Margarita Slam, salty and sweet water. RIP Larry. Someone with good searching skills can probably pull up the thread from years ago.

Thats a great report and good to see you guys getting on the water too! Love that pic of the flatty

My three best flounder, all around 25", ALL came on the OG “Bob Sanders” Trout Tricks. Something magical about them. IYKYK. BTW, we still sell them at Eye Strike. Z-Man does too.

Remember that bumblebee boat Bob had?

Oh yeah, and his Point Clear was a really sweet rig. I came up on him once with a charter in Store creek and he was stuck on a sandbar

I ragged on him a few times about that… Miss him, great guy. Great with kids.

One of the best compliments I ever got was from Bob.

Before I actually shook his hand I was shucking sheephead at the EIYC landing one day and I hear Bob telling some guys he’s with that he could tell a real fisherman by the way he cleaned fish.

They watched me separate a dozen fish, shot the schitt with them over a couple beers, introduced myself and shook his hand.

We bumped into each other a lot those summers.

Raddaddy was killing the reds while chatterbait was still king. Bob was slaying trout and talking about the new lure he was working on and I was just trying to figure out my arse from my elbow.

Bob was a good egg

That’s awesome EF. Raddaddy is good people too. I’m proud to know him. Few people have had as big an impact on the fishing industry as him and his Dad. Bob paid me a high compliment once also, he said I was the fastest learning fisherman in Charleston. I met him by chartering him at Edisto. Late August, typical mud colored Edisto water. Me and my two young boys (at the time) put I think 32 ish nice trout in the boat only using his TTs. To this day, that is impressive. I don’t really know why, but we became pretty good friends after that.

Question… What Brackish areas are you fishing to get the large mouth and striper? Haven’t caught a striper in salt in 25 year and only a few in brackish. Have caught more stripper in fresh as far up as hwy 21 on the edisto fast trolling.

That Margarita Slam has to be a good feeling!!! I’m racking my head on areas I know and the trout would be the hard one for me. I know areas not too far up or down a river for flounder, spot tail, striper, and largemouth, but the trout would be a good bit further run. I’m talking in the ACE basin area. What kind of slam would it be minus the trout and striper?

Hi Fred, Any of our rivers that span from salt to sweet have the potential for a Margarita slam. I’m fishing the Cooper because its closest to me, but I’ve been wanting to target the slam in the Edisto, Combahee, Santee, etc. Part of the fun and challenge is to strategize how to achieve it. Trout prefer saline so I target them in the lower stretches. Reds, Flounder, Striper are all brackish water targets and of course LM prefer fresh. For me, typically, striper and flounder are the biggest challenge for me. Striper are pretty hard to pattern as they follow bait around. There are a few places where we have a better than average chance at one that we all keep close to our vest. I love striper so much, that I don’t even care what the regs are, I will never keep one. They are such an awesome game fish.
I’d love to see you get a Marg slam in the Edisto that would be outstanding!
-Dave

If you want to know how nerdy I am, I just bought a refractometer so I can measure the salinity. Now, Barbawang can do it by tasting the water and be +/- 2ppm, but he’s not mortal

Pretty much from within eyesight of the Bushy Park Landings… Also, upper Goose Creek as well…

Under the N. Rhett Bridge several years ago I caught a trout, LM, and spottail on the trout tricks. Have also had striper caught from my boat very near there as well.

Your trout free slam could be just called the Brackish Slam, I donno haha, that’s all I got

refractometer is how i calibrated mine too! I lose it in the upper teens, but that’s a little above where trout usually stop anyway.

small systems like the Ashley and Combahee vary hugely in their salinity regimes based on season and rainfall. I wouldn’t fish an area like Steel Bridge without tasting it first, cuz you might be catfishin’ when you think you’re redfishin’