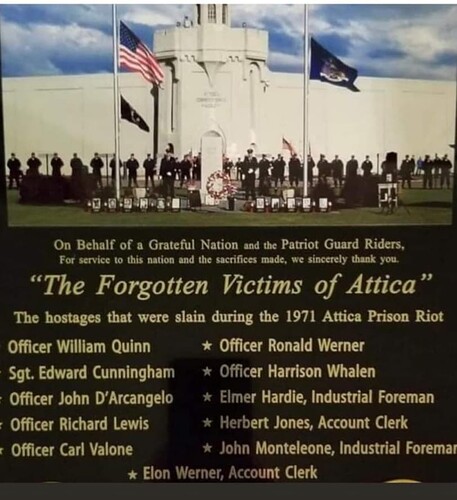 Screenshot_20220911-203509-231812×888 63.3 KB
My wife sent me this that my cousin had posted. My dad was in the prison when the riot broke out. He was a block captain in what they called the booth/maximum security. He was not a hostage but he was trapped in the prison. The only weapon they had was tear gas. And nightsticks. He said anytime they come try to breach the door they would bounce a tear gas grenade off their heads. Said fortunately it was a narrow stairwell to get to where they were at. His horseshoe partner Ray (can’t remember his last name) was a hostage in the yard. They cut his throat when they took the prison back. But he survived. He got cancer a year or 2 later and died. They kept the hostages soaked in gasoline 4 days.
I was 9 years old and I remember watching all that on TV like it was yesterday. We had no idea if my dad was a hostage or if he’d been killed or what. Fortunately he made it out in one piece.
DFreedom September 12, 2022, 10:15am #2

That must have been a terrifying ordeal for your dad and the others involved.

I had forgotten Attica and didn’t know anyone in there sure glad to hear your dad survived that horrific ordeal.

Man, that had to be a crazy time for you Dad!! So glad he made it through alive!! I watched the movie, but thought it was too much on the Prisoners side. Play stupid games and end up in prison. Live right and treat others good and none would have been in Attica. I have little remorse for those in Prison.