I’m thinking of mounting a Garmin GMR18 on my T-Top (Scout Sportfish 242). I can put it on a pedestal mount to get the radar beam above the mushroom antenna for the GPS (but it will still be only about a foot away), and it will be 6 inches above the VHF in the electronic box mounted under the T-Top and it will clearly be only about a foot from my VHF antenna. The installation guide indicates that - basically - I just don’t have enough room on this T-Top to add a radar due to interference from electromagnetic pulse from radar with all my other electronic junk clustered on the T-Top. Anybody have any experience on this issue. Seems like most small T-Tops would have the same issues - yet I see radar systems on a lot of these smaller boats.

Your radar beam is approximately 25degrees either side from horizontal. Given the distance you described, you should clear your GPS antenna and your VHF antenna probably won’t affect it or vice versa.
I have a similar set up on a 282 Scout and it works well.
With that said, I like XM weather best for weather issues. The radar does ok in fog and for close contacts etc.
Hope that helps.
Rick

Rick - thanks. I went to the Salt Water seminar this past Saturday and was impressed with their use of radar on identification of birds feeding offshore. So - I thought to give this a shot. Glad to hear that all your other ‘stuff’ is not affected. I already have XM weather (and it has saved my a**) mushroom antenna, GPS antenna, VHS antenna, outriggers, and a spotlight on the t-top and then I have the VHS radio just underneath the t-top in the electronics box. Is your set up on your 28 ft similar? You get no interference with any other electronics? Thanks - but this is a big investment for me and I want to be sure.

The small radomes do not provide sufficient power for tracking birds. You need an open array, and about a 4KW unit for that.

“Back home we got a taxidermy man. He gonna have a heart attack when he see what I brung him”

Sounds to me like you’ll be fine, SeaEscape. I’m no boat elecs expert, but I was in the elecs business before and I’ve successfully installed a few radars (and other elecs), including some on some T-tops (e.g., 31-foot) crowded with two GPS antennas and two VHF antennas, etc., and I never had a problem with interference. You just dont want the beam of the radar beaming straight at the the reception area of any antenna at close range. The active (electrical) part of a VHF antenna’s length does not actually start at the base of the whip (in most cases that I’m aware of, at least), and the beam of the radar is relatively narrow near the antenna, and won’t reach anywhere near the top of your whips (unless you have them gunnel-mounted), so that should not be a problem as long as your VHF’s are top-mounted and are the minimum length they really should be (8’–which I’m sure they are). If you end up with any problem with the GPS or other antennas, thoug h, just move the antennas so they active parts of them are either over or under the radar beam.

One thing you will probably have, though, is two, narrow blind/reflection srips on the two rear corners where your outriggers are, or where your VHF antenna mounts are if you have stainless mounts and they are in the line of sight of the radar and close up to it. But that’s no problem, really, and is pretty common. I’d get the radar and put it on without any further concern if it were me.

That being said, the one problem I have had with radars is that the Garmina (at least the 404’s, anyway) have (or had) a manufacturer’s defect that is known commonly on the internet as “Error code 5”. There is a certain condition with gain adjustment or something where a certain component spontaneously goes out in the pedestal, and the only way to fix it is to send the unit back. This is not the same condition as the Error Code 5’s that can be solved by turning off the auto-gain and/or by updating the firmware (but those exist also). With this EC5 propblem, everything will

You’ll be fine and the GMR18HD is an awesome radar. No issues at all, I have VHF, XM WX/Radio, and GPS up there with no interference. My VHF radio is also in the E-Box right below the radar. You’re not going to see birds, as said before, you need a larger open array for that. You may need to have a mounting plate welded to the T-Top for the radar pedestal to bolt to, I did on my Scout 222.

Below are photos of the radar mounted on my scout 222. 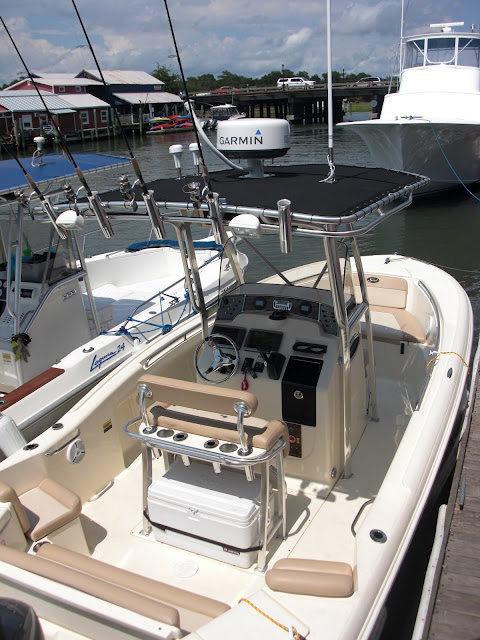 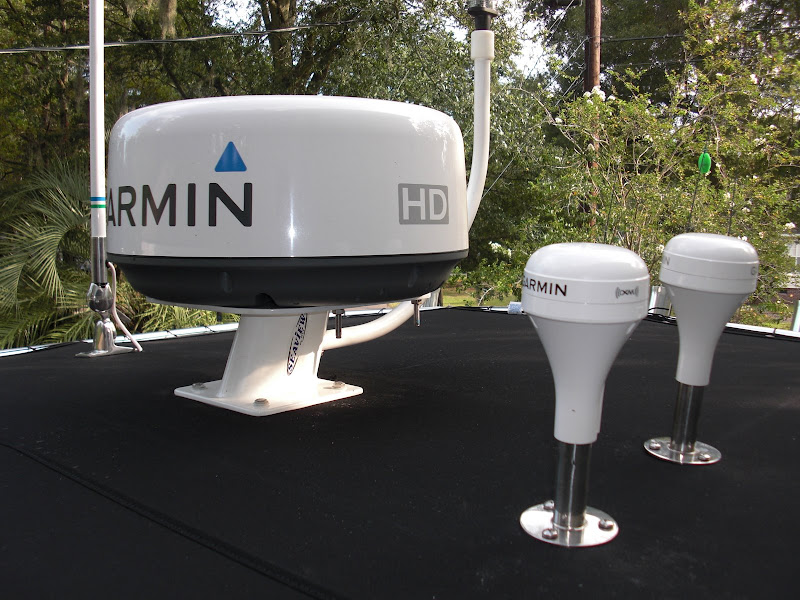 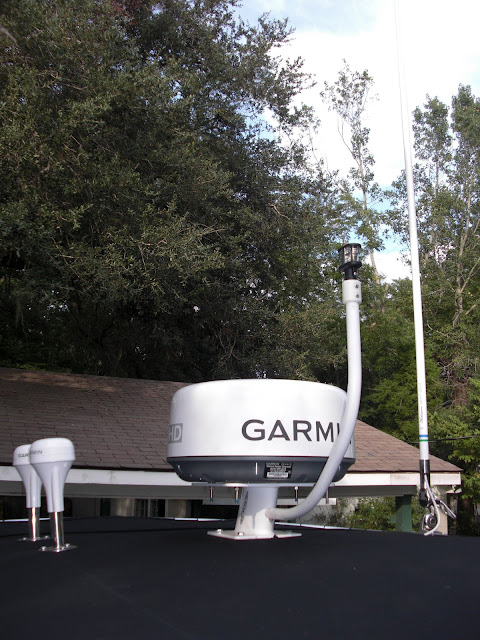 I am not familiar with the Garmin GMR18, but my Raymarine radar fried my Lowrance GPS antenna. At first, as soon as the radar started to pulse, my lowrance GPS would say it lost communication with antenna.

If you can’t stand behind our soldiers, try standing in front of them.

accurate advice across the board.
we installed the electronics on mtiffes boat, and he spent the money to do the best electronics set up of any center console boat