Let’s see if I can get this link to post? 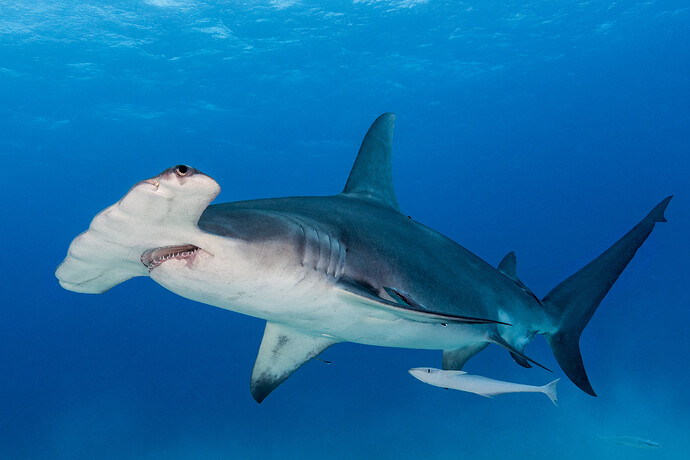 The ginormous shark may have smashed a state record, however it was released back into the water shortly after being caught.

I’ve seen some monster hammers on the surface over the years offshore and never once thought about trying to put a bait in front of them. Incredible catch.

I’ve seen them bigger than that along the edge of the stream about 50 miles out. The last thing we wanted to do was hook one up and spend the whole day on one fish just to release

The fist time I ever went offshore fishing, I was so excited and had hopped up on the bow to look for weed lines. I saw what I thought was a small one off the port bow and told the captain. He altered course and as we got closer saw it was a HUGE Great Hammerhead. It slowly swam right past the boat. The boat was 25’ and I swear the shark only looked a little shorter than the boat. The captain said, “And that is why I do not get into the water”.

Glad they let the shark go. As big/scary as they are, there are very few reports of Great Hammerheads attacking humans…though I would want to test that/

Thanks for posting, MN.

Have seen him several times at the mouth of Broad River when headed out.

26’ Glacier Bay with name on side, unless he changed sleds.

From the photo i suspect the fish was over1k It would have been a long slow ride to bring that beast to the scales Then there would be another problem to dispose of the carcass! Once on a charter we hooked a 100 + - lb tiger shark in 90’ Alongside the boat one guy wanted to extract a tooth with some pliers. The shark thrashed around and we decided that this was a very bad idea

Wow , what can ya say . It beats my biggest catch and glad it was let go

Using big baits offshore trying for grouper one time, I hooked into something really big. After about 20 minutes I brought a ~150ish lb shark (no idea what kind) to the surface. It was all I could do. The strength in those animals is incredible. I can’t imagine fighting something 10x as strong. Kudos to those guys