The early bird gets the....fish?

Took the son out super early this AM for a fish session before high tide circled back around.

Arrived on the beach around 4am (about 52 min before low). With no real expectations with the winds and slight chop, we set up. Took all of 5 min to catch enough live mullet to last the entire morning. It didn’t take long. Five minutes after baiting up, we (I hooked it and he reeled it) caught a 17 1/2" Flounder. Second cast out, we (same concept) hook into a 18" trout. Of course, my son is super excited at this point, as it hadn’t even been half hour there we catch 2 “keeper” (I’ll explain the quotes later) fish.

So, I baited both my sons and myself with fresh bait and proceeded to fish again. My son loses his bait to those sneaky crabs. So, I set my pole in the pole holder and proceed to rebait his hook. As I finished up, my pole bends in half and in a quickness it went slack. So, in a panic I turned quickly to grab the pole out the holder to check it and see if the fish was still there. In doing so, I unintentionally Heisman stiff armed my son as I was turning. Grab the rod and reel the slack and sure enough the fish was still there. So, as I have been doing all morning, I handed it over to my son and the fish just started taking drag. I helped him support the rod to where he could get the fish on shore and it was a nice 30" Redfish.

At this point we are thinking we are going to have a hell of a morning. Then all the sudden fishing died. Fished another 3hrs from 5am-8am and my son managed to catch a blue and 2 fat toads. Also, one more flounder was caught by my brother.

The plan was to originally fish the entire tide coming in, but my son soon lost interest as he was tagged a few times by a sea nettle jelly. First time being stung and of course I didn’t pack the vinegar like I usually do this time of year. All we had was sand to rub on it and of course that’s only a temporary ailment, since you have to rub it over and over. Of course, after about 10 minutes, I go over to see how he’s doing and slip on a beached nettle and the tentacles break off on my ankle. So, we both got tagged. I’ve been hit dozens of times and was able to brush it off for the most part. Still itched like a mofo.

We released all the fish besides the trout as it I was sure it wasn’t going to make it after an initial revive. We later gave it to a couple guys setting up as we were leaving.

Anyways, that pretty much was our morning. Still a good time and again, letting my son catch some fish is always a good time. He gets more full of himself on each outing. 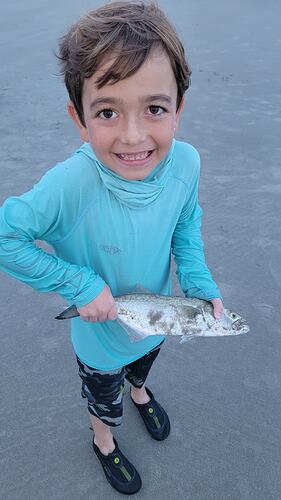 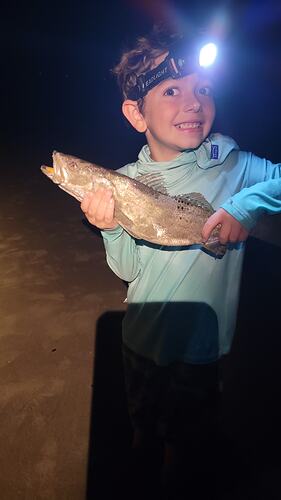 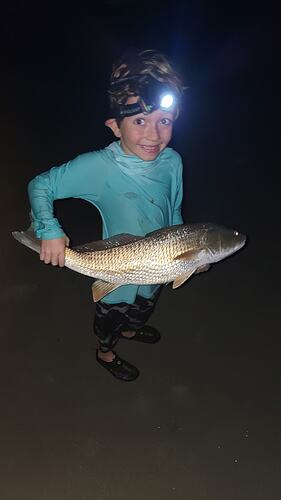 Yeah, I remember those days fishing with the little dudes. If the catching wasn’t pretty consistent, you’d better have plenty of snack to keep them occupied. You’re doing right though, take them out young and get them hooked.

Nice report, and that smile is just too much!! Memories made!!

Yessir,you fellas are doing it! Enjoyed the report

Great report and awesome job with your son!

Thanks for the great report. Thats one happy camper!